Cell theory of Matthias Schleiden and Theodor Schwann scientists says every living being is made up of tiny structures known as cells. So all 3 living beings – Animals, Plants and Microorganisms – are made with collection of cells known as tissues. 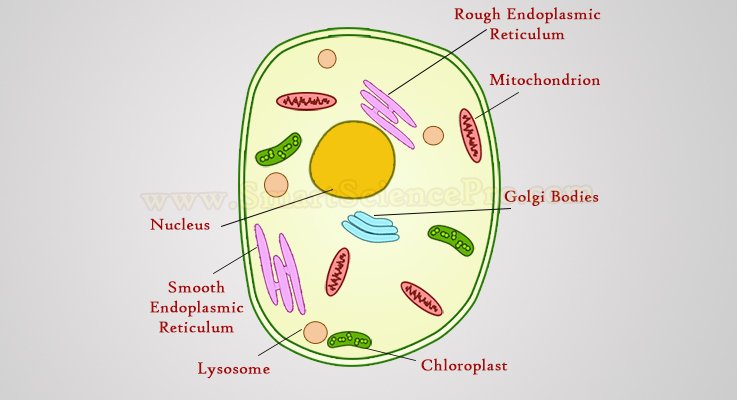 This tiny cell contains various parts as mentioned in the generalized cell structure. You can see these micro parts using a microscope. These parts are known as organelles of the cell.

In other words, Organelles are the tiny structure or subunits within a cell to perform various functions according to the main functions of a cell. Every part does something unique to the cell, hence all those are known as organelles.

Below are few organelles which I’m going to explain in this post.

Organelles in a cell are not limited to above 5, but I explain only the above ones now. You can find other organelles in other resource websites.

As humans the heart is our main organ and the most important organ in our bodies. Similarly, the nucleus is the most wanted and important organelle almost in any cell. All the activities in a cell is maintained and controlled by the nucleus.

What’s the largest organelle in a cell? Ya! It is the same nucleus again. This is covered with two membranes and inside the nucleus, you can find a nucleolus and chromatin fibers which is responsible for carrying hereditary characteristics such as DNA and Genes.

Chloroplast is an organelle which is presented only on plant cells. There are stacks of discs known as Grana inside the chloroplast. It contains a pigment called chlorophyll and others such as Carotene and Santhophyll.

There are 2 other things in the chloroplast, Starch grain and DNA. The photosynthesis process is totally depended on chloroplast organelle which is the process of turning light energy(trapped in chlorophyll) obtained from sun to foods. Cholorophyll is just one factor required for photosynthesis, but not the only one.

Mitochondria is covered with 2 membranes. This organelle can be known as power plant of the cell due to its ability of supplying the energy required by cell to perform its functions. In addition to the main function of supplying energy, Mitochondria is responsible for the cell growth, cell death and controlling the cell cycle.

This organelle sometimes known as Golgi Apparatus. These are available in every cell where there is a nucleus. It is a flattened membrane-bounded structure which is formed at one end of the stack.

Golgi apparatus is a transport system and an internal process of the cell. Materials are transported to other parts of the cell by Golgi vesicles.

Example would be the Golgi vesicles in the cells of Pancreas are producing Trypgynogen enzyme by letting protein to react with carbohydrates.

Endoplasmic reticulum also available in every nucleated cell same as Golgi bodies. This is also covered with 2 membranes and has a tubular structure. It is bounded by nuclear envelope outer membrane. Ribosomes can be seen on the outer membrane.

Synthesis of protein requires the RNA available in the endoplasmic reticulum organelle. Nuclear material transportation from one cell to another is also done by ER.