Therefore, we’re going to concentrate on Invertebrates in this post.

A natural classification has few characteristics and all the classifications of this system are following those. So here are the features of this type of animals. 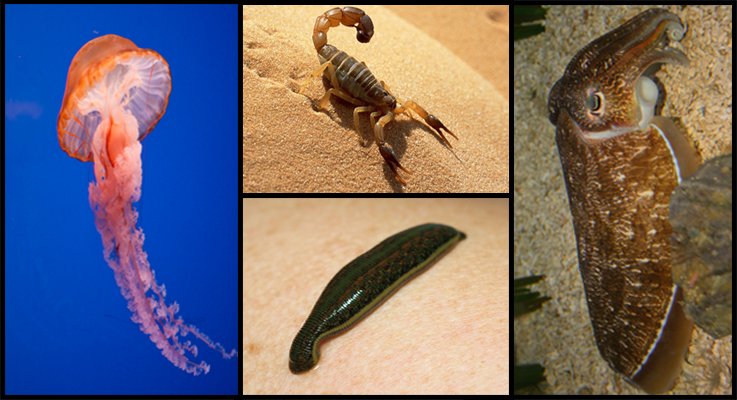 Since now you realize who are invertebrates, it’s good to learn their other characteristics too. May be your science exam would ask these or you may want to clarify some animal’s type.

Invertebrates includes every animal that doesn’t belong to vertebrates group. There are 4 main types of invertebrates as mentioned below by Phylum.

Each group have their own characteristics and unique adaptations. I’ll explain each of them below.

Arthropods are animals who do have a segmented body. They have a bilaterally symmetrical body with a very strong exoskeleton. Arthropods have the ability of adapting to various environments very quickly.

A pair of appendages can be seen in each segment of the body. There are jaws appear in some of the appendages.

Unlike arthropods these animals don’t have segmented body. Mollusca skin has a mantle which secrets a shell. Their skin is soft and the body is bilaterally symmetrical. Mollusca can be found in fresh water and sea water.

Annelida group contains many of the worms around. They have segmented bodies made up of 3 layers, hence they can be known as Triploblastic animals. Triploblastic means they have 3 layers of skin as outer skin, middle skin and inner skin.

Annelida group animals have a cuticle which covers their skin. They posses coelem and hard bristles and the reproduction is sexual.

Coelentarata animals have a radially symmetrical body. They are opened through the mouth to external atmosphere. These are diploblastic animals which means their body is made up of 2 layers called Ectoderm Skin and Endoderm Skin.

Presence of a central gastro vascular cavity used as the mouth and anus which is lined by Endoderm skin. Some coelentarata animals do have poisonous substances mixed special cells known as Endoblasts which protects them.