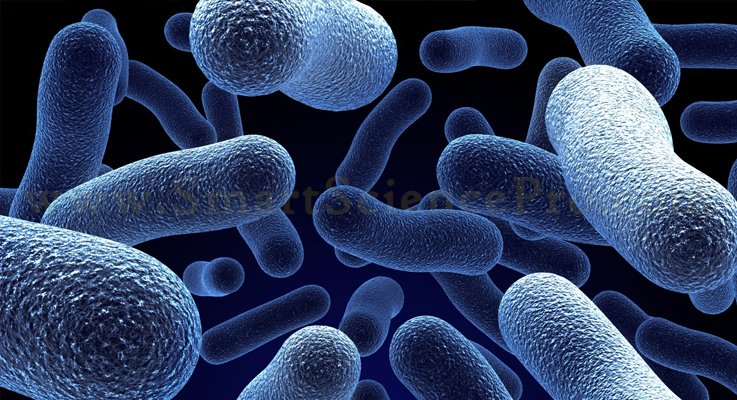 You could easily see the previous 2 types of main living beings, but not these microorganisms, because they can’t be observed with your naked eye. As the group implies, microorganisms are living organisms which requires something special to see them.

Okay here we go for a quick explanation on each of these organisms.

Bacteria is a unicellular organism with a body size of 3-5um – Micro Meter. Their cells contain cytoplasm, but the nucleus membrane doesn’t available in the cells. Bacteria has a cell wall formed with protein – Mucopeptide. Some bacteria can be harmful as they are disease causing ones.

These disease causing bacteria has a gelatinous cover around the cell wall. The cell structure and reproduction is similar to specific type of algae. Reproduction of bacteria is through spores and binary fission.

Do you know that a full stop is made up of about 900 bacteria in a printed book? It’s a fact 😉

There are 5 another types of bacteria according to their nutritional habits.

Saprophytic Bacteria
This type of bacteria can be found on decomposing tree trunks.

Parasitic Bacteria
These are pathogenic type and live on living organisms in their tissues. They can harm the host.

Autotrophic Bacteria
These are purple color and they are photosynthetic. So they can produce their own food.

Symbiotic Bacteria
This type can be found on leguminous plants in the root nodules. They can perform the nitrogen fixation which means changing the atmospheric nitrogen to an absorb able form.

Chemosynthetic Bacteria
These bacteria too can produce their own food by doing chemical reactions. Chemosynthetic bacteria is the beginning of life on earth according to one theory. Fission of this bacteria occurs every 18-20 minutes and if a cholera bacteria reproduces at this rate, then 4.7 x 1022 amount of bacteria would be reproduced within 24hrs. And this amount will have a mass of 2000 tons.

By the way, that isn’t happening as it should due to poisoning of excretory products.

Algae also cannot be seen with the naked eyes. There are unicellular algae as well as muticellular filamentous algae. They produce their own food by photosynthesis, hence they can be known as Autotrophic.

Most forms of algae are aquatic so they are living in fresh water and in sea water too. Algae develops as clusters of cells and as individual cells.

Protozoa is also a unicellular organism with large number of aquatic species of around 40,000. Usually they move onto other living organisms and feed on them. Protozoa has a body size of 10-52um.

Fungi are none green plants which are not photosynthetic. They are heterotrophic nutrition type because they are parasitic or saprophytic. They show a symbiotic relationship with Algae to form lichens. Some fungi can be seen with naked eyes.

There are fungi as mushrooms and molds with a multicellular structure known as mycelium.

Viruses have a very simple structure and the most smallest microorganism discovered so far by the man. They can reproduce and don’t breathe at all. Viruses can capture living cells and reproduce on them. They have the crystallization ability.

Do you know that few artificial substances which have the features of viruses have been able to reproduce. Therefore, some say that viruses are in the middle of living and non-living.

This site uses Akismet to reduce spam. Learn how your comment data is processed.